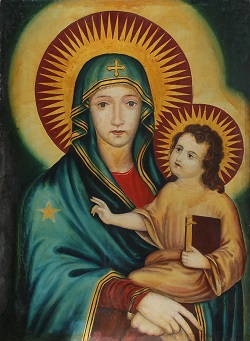 Icon of Madonna and the Infant Jesus, at the center of the Main altar - St. Mary's Forane Church, Pallippuram

A centuries-old Syriac hymn that loudly proclaims sound Christology and Mariology. The version that is currently available contains 44 couplets that succinctly narrate the life of Jesus. In performance, the first couplet serves as the refrain which reminds that the Blessed Virgin Mary (Maryam) gave birth to Jesus the Son of God (Bar alāhā). In other words, Maryam is the Mother of God. The anonymous author of the song ingeniously elevates the status of Mary. There is a semantic shift to the derogatory comment that people made about Jesus in the Synagogue at Nazareth: “isn’t this the son of Mary?” (Mk 6:3). The song extols the life and deeds of Jesus and returns to the refrain, saying that this Jesus is the Son of Mary (Bar Maryam), and that son of Mary is the Son of God (Bar alāhā).

The song text, which may be of Middle-Eastern origin, is a common patrimony of the Chaldean Catholics as well as the Syriac Christians in India. The Chaldean Catholics continue to sing this song, albeit with a different melody and an Arabic vocal inflection ( see Chaldean Catholic Bishop Singing Bar Maryam ) . Sadly, some of the Syro Malabar Catholics disowned this intangible cultural heritage even before the vernacularization of the Syriac liturgy (1962). Fortunately, the younger generation is currently warming up to the song enthusiastically to rediscover their identity.

It is not clear if the melody is of Indian origin. We have one example of a Marian song in Tamil in the meter and melody of Bar Maryam (Aramaic Project-5A ). Also, we have a recorded sample of the tune with different texts from the Syriac singers from St. John Nepomucene Church at Kadavanthara, Ernakulam (Aramaic Project-51M ). This church belongs to the Archieparchy of Ernakulam-Angamaly. There is yet another sample of a popular devotional song in Malayalam that is sung to the melody of Bar Maryam (see Aramaic Project-53 ).

Although the song was a common patrimony of all the Syriac Christians in Kerala, the Knanaya community among the St. Thomas Christians can be credited with preserving the tradition of singing this song at the conclusion of the wedding ceremonies in the church with a final blessing on the couple by the celebrant. The songtext, however, does not make reference to the wedding at Cana.

The historical significance of the song is noteworthy. In retrospect, the Portuguese missionaries did not have to impose the burden of Nestorian heresy on the St. Thomas Christians . By singing Bar Maryam and Sagdīnan mār, the St. Thomas Christians had been reiterating in different words the correct Christology of the Ecumenical Councils of Ephesus (431) and Chalcedon (451). By continuing the tradition, the present generation of Syro Malabar Catholics can reverse the course of history and redefine the future, and add India into the international imagination of Eastern Christianity.

Transliteration of selected verses in Malayalam and English

( These are the verses included in the CD, Qambel Maran: Syriac Chants from South India [PAN Records, Netherlands, 2002] )

Translation in Malayalam and English by Fr. Emmanuel Thelly, CMI

Note by Fr. Podipara:
There is a hymn called “Bar Mariam” (the Son of Mary) which is sung as “paraliturgical” by priests and people at the end of the wedding ceremonies of the Southist community of the Chaldeo-Malabar rite. This community traces its origin traditionally to a foreign colony that settled down in Malabar in the 4th century. The hymn is in the Syro-Chaldean language and is translated into the Malayalam characters for the benefit of those who do not know the Syro-Chaldean characters.
We give below an English translation of this hymn. The translation is from the text published in Malayalam characters by Mr. P. U. Lukas Puthenpurackal in “Ancient Songs of the Syrian Christians of Malabar (3rd edn, Kottayam, 1954, p. I. III). Mr. P. U. Lukas says (ibid. III, note) that the hymn formed a part of the Divine Office of the Chaldean rite for the feast of Christmas and Epiphany.
(Note: we added the serial numbers for the couplets)

Note: The hymn contains no philosophical or theological terms such as 'qnoma', 'parsopa'. At the same time, it expresses clearly that the Son of God is the Son of Mary: in other words, Mary as the Mother of God the Son.